There’s nothing wrong with being a Belieber or a Directioner. There, I said it. Hell, I encourage it. I would be a huge stinking hypocrite if I didn’t. You know why? Because all of my notes written in Middle School were addressed to me thusly: 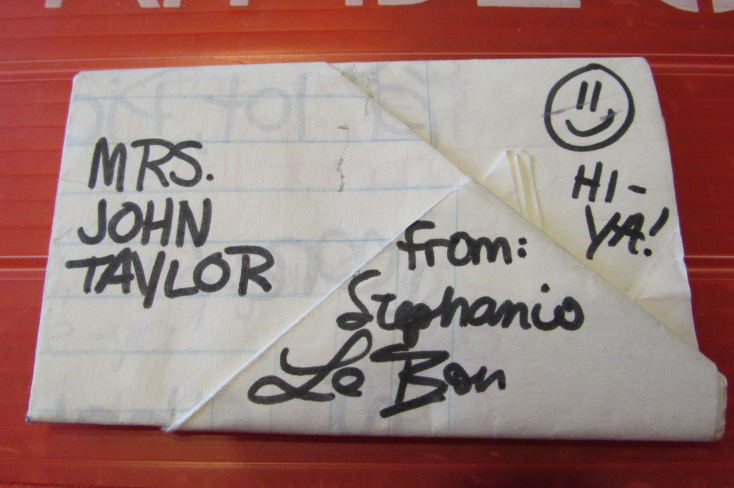 Yes. I was a Duran Duran fanatic. (I just asked my husband what it was that Duran Duran fans were called. Was it Duranies? He answered, “I think it was Duranarrheas.”  He was not and is still not a fan, needless to say, though he has listened to the Talking Heads album “Stop Making Sense” eleven billion times since he was a teenager.)

In 1984 you had to pick your band member of choice and mine was obviously the gorgeous bass player. My best friend Stephanie had obviously more love in her 13 year old soul for Simon LeBon.  Making the decision to boldly love with all of our hearts was important to us. We taped songs from the radio when they came on, bought every piece of merchandise/magazine/album pressing we could find.  It gave our lives shape. Middle School wasn’t just a string of sucky days broken up by band concerts and lame family vacations.  We could talk constantly about concert dates, album releases, and the band’s pursuits. It was very IMPORTANT. We wrote fan fiction. We loved – HARD.  All American bands sucked as far as we were concerned. If they weren’t British, they were crap!  When I read somewhere the poets whom Alannah Currie from the Thompson Twins admired, I read all of her poems.  It made life bearable. It was safe and comforting and was a way to find my tribe. I belonged.

I’ve read a few interviews with YA authors who are asked, “What were you like as a teenager?” and their response is usually, “Oh God!  I was such an awkward and weird mess.”  That’s usually the extent of it and it makes me sad.  Of course, it’s not just YA authors. Many people talk that way about their adolescence as if they have offed that version of themselves that thank God they’e lived long enough to make people forget about the 15 year old version of themselves. That’s not how it should work, says I. Here I am at 16 with one of my best friends Andy:

He is brandishing a cassette.  I am wearing an oversize blue wool Benetton sweater over a Bernadette Peter’s in Andrew Lloyd Weber’s ‘Song and Dance’ Broadway show t-shirt that my boyfriend had drawn for me with a sharpie. We’re in Andy’s basement bedroom in Colorado during a trip that I paid for by working six days per week busing tables at the Officer’s Club on the Air Force Base where we lived. His room is covered in albums and album art and we’re big dorks.

I was a huge fan.  I didn’t just like things. I loved them so much that I was sure I’d die from my heart bursting open. It wasn’t frivolous. When my paternal grandfather died just months after my maternal grandfather the summer I was 16, I walked into what had been his CB room and put The Smiths on a tape player and cried and listened for hours alone. I knew that Morrissey understood.  Thank God I had him in my life.

One of the greatest outrages of my teenage life came in the summer of 1985.  Our family had to move from Springfield, Virginia to Montgomery, Alabama that summer and my parents scheduled our drive to Alabama on July 13th, 1985 – THE DAY OF LIVE AID! I missed the whole thing! The tragedy was impossible to communicate to my parents, and I’m still mad about it.  If you’re my age, then you know how scarring this was for me. If you’re a teenager now, I just can’t think of a similar event that would be its equivalent.  It was a tragedy!!!! A tragedy, I say!

I still love music, musicians and artists. I’m far from unique. I also still love the same music that I loved when I was 13 and still listen to it.  I play music and music videos for my reading classes when we’re all thought out for the day and need a break. When I start a YouTube video, I inevitably say, “I loooooove this (band, song, video).” One day one of my students said, “You love things too much, Ms. Lively.”  I thought it was a huge compliment.

My latest obsession is Pentatonix. I am a Pentaholic and I don’t care who knows it.  It gives me cachet with the kids, because they know that I love a band that is just starting to become very famous. If you don’t know who Pentatonix is, you should because they’re the most fantastically talented and amazing humans on the planet Earth.  I am going to go see them in concert this Thursday night March 19, 2015 and it will be my Penta-Pentatonix concert. I will be a part of the five-timers-club. I have rediscovered my former ecstatic fan self with this band. After they won the “Sing Off” on NBC, they went on tour and I took my whole family to see them at a small concert at the Howard Theater in DC. I don’t think that the show was even sold out. My youngest son, Lance is now 11 and has a harder time making friends than my older children. He also has a rich fantasy life.  He found solace in watching Pentatonix on youtube https://www.youtube.com/user/PTXofficial for hours. They are young, they are genuine and they’re fantastic and their videos often feature candid talking as if you are sitting on a tour bus with them, or laughing at their weird and even dorky jokes.  I bought VIP tickets for Lance and me for the last 3 concerts we’ve attended. Last March, I splurged and bought front row center tickets for the two of us at DAR Constitution Hall in that included a private concert in their dressing room. It was a once-in-a-lifetime experience, and it was amazing.

I’m still the same person I was at 13.  I have been telling my students for a few years that Pentatonix’s tall, beautiful, blonde and half my age singer, Scott Hoying is my boyfriend. They always say, “But, Ms. Lively, you’re MARRIED!” with both scandal and horror in their voices.  My response is always, “But I’m not married to you, so don’t worry about it.”

When we got our posters signed in the line at the last Pentatonix show, I explained to Scott that my students just did not believe that he is my boyfriend. I asked him if he could sign my poster so that they would finally believe in our relationship. He obliged because he’s a fantastic human being not above humoring a woman who enjoys her fantasy life as much now ans she did when she was 13.  So, what was I like as a teenager?  I was pretty much the same girl I am now as this poster will attest.

So, though I may be older and have more education and am a wife and mother today, when it comes to my “love life” as a fan, not much has changed. I am still madly in love with a tall, beautiful musician whose music makes me happy. There’s nothing wrong with it. If you’re disparaging a Belieber, a Directioner, a Kanye devotee, Taylor Swift, or a Beyonce love, because they’re “just a teenager and they don’t know what they’re doing and have terrible taste in music” you’re just wrong.  We teens and former teens know what we love and there is not logic or empirical data that makes an impact on us. Just stand aside and let us “belieb,” or “direction” or be the biggest “Swifty” in the world.  We’ll all “Save a Prayer” that you find something to love like we have.